Finiteness in Chinese is semantically-orientated and implicit. It relies on the combination of verbs with aspectual markers to distinguish finiteness，and the lexical restrictions are optional. In English，finiteness is morphologically-orientated and explicit. It relies on inflectional morphology to distinguish finite from non-finite forms and morphological restrictions are obligatory. The finite and non-finite distinctions in the L1 may influence the acquisition and comprehension of MVCs in the L2，and the L2 learning involves mapping between forms and meanings，switching from the lexical to the morphological cues or vice versa.

Research gaps exist between the theories of typological differences on finiteness and its influence on second language studies；between the previous literature on MVCs’ error analysis and transfer analysis，with a detailed comparison of the L1 and the L2 in the research scope；between the investigation of learners’ interlanguage and processing in the research methodologies；and，finally，between the one-direction studies and bidirectional studies in terms of research direction.

As described in earlier chapters，Chinese and English MVCs differ，since they are composed of finite verbs with non-finite verbs in English but made up of bare verbs or verbs with aspectual markers in Chinese. Even though much effort has been made to discuss finiteness in Chinese，no specific comparison had been made between Chinese and English MVCs on the basis of the finite/non-finite distinction. The current research fills this gap by providing a detailed comparison of Chinese and English MVCs based on the semantic finiteness theories（Klein，1998，2006，2009）. The comparison is thus classified into two types：in sentences with verbal subject or object，Chinese and English MVCs have a similar division of finiteness but different cues for distinguishing finite verbs from non-finite ones. In another type of sentence，Chinese pivotal sentences are interpreted differently，with an aspectual morpheme after V2. because V2 is encoded with temporal information and composes a compounded predicate together with V1. Moreover，Chinese serial-event sentences with bare verbs have more than one interpretation，so these structures have both meaning and form contrasts with English non-finite verbs，as the object complement or adverbial. In other words，English MVCs have explicit morphological finiteness，and do not display any differences from the syntactic positions of non-finite verbs. Chinese MVCs have semantic finiteness and show different features in the finiteness division in different sentence types，which include both sentences with a clear finite and non-finite distinction and sentences with compound predicates，which is unique to Chinese. Given the cross-linguistic differences between these two languages，learnability problems arise.

The debate on the finiteness of Chinese has been ongoing for decades，but the research has remained at the theoretical level. As regards the influence of finiteness on second language learning，little research has been carried out so far. Given the huge cross-linguistic differences between English and Chinese MVCs，learnability problems may be evident，but the previous studies discussed above have been insufficient to expose the influence of the differences in the expression of finiteness on the acquisition and processing of MVCs in the L2. The current study thus fills the gap between the theories of the typological differences of finiteness in different languages and its influence on L2 learning.

The few studies on the acquisition of English MVCs by Chinese learners and Chinese MVCs by English learners were limited in research scope，and focused solely on error analyses and frequency-of-use comparisons. Further investigation into the effects of the L1 on processing as well as the acquisition is required. The current study aims to fill this gap in the research scope.

Additionally，the methodologies in the current research are more diversified and involve different approaches in L2 researches which can fill the gap caused by the rarity of L2 studies on online measures in Chinese. As Mai（2015）commented，the Chinese L2 studies in recent years “typically tap into the property of L2 grammars using behavioral methods such as grammaticality judgments，translation，and structured oral production tasks. Research using time-course sensitive online measures such as eye-tracking and self-paced reading is still rare”（p. 15）. Besides real-time processing methods，quite few studies have focused on the acquisition of these Chinese special structures，like pivotal sentences，serial verb constructions or verbs/verbal phrases as subject and object. As Zhao（2011）summarizes，in comparison with the English as L2 studies，the research on L2 Chinese learning is a relatively new area.

The current thesis comprises a bidirectional study，which can give us a clear，direct insight into the comparison between processing lexical cues and morphological cues. This is an important way to investigate cross-linguistic influence，as Odlin（2005）stated，“[a]nother dimension of transfer research is the study of bidirectional transfer”（p. 5）.

In sum，the research gaps tend to lie in four areas：from finiteness theory to its influence on L2 MVCs learning；from L2 MVCs acquisition to comprehension；from non-time limitation methods to real-time methods；and from a single direction to bidirectional study. In Figure 1 “research framework”，a grey rectangle means that there have been previous studies on this topic，but the research perspective differs from that of the current research，while a white rectangle indicates that no previous research has been carried out on this aspect. 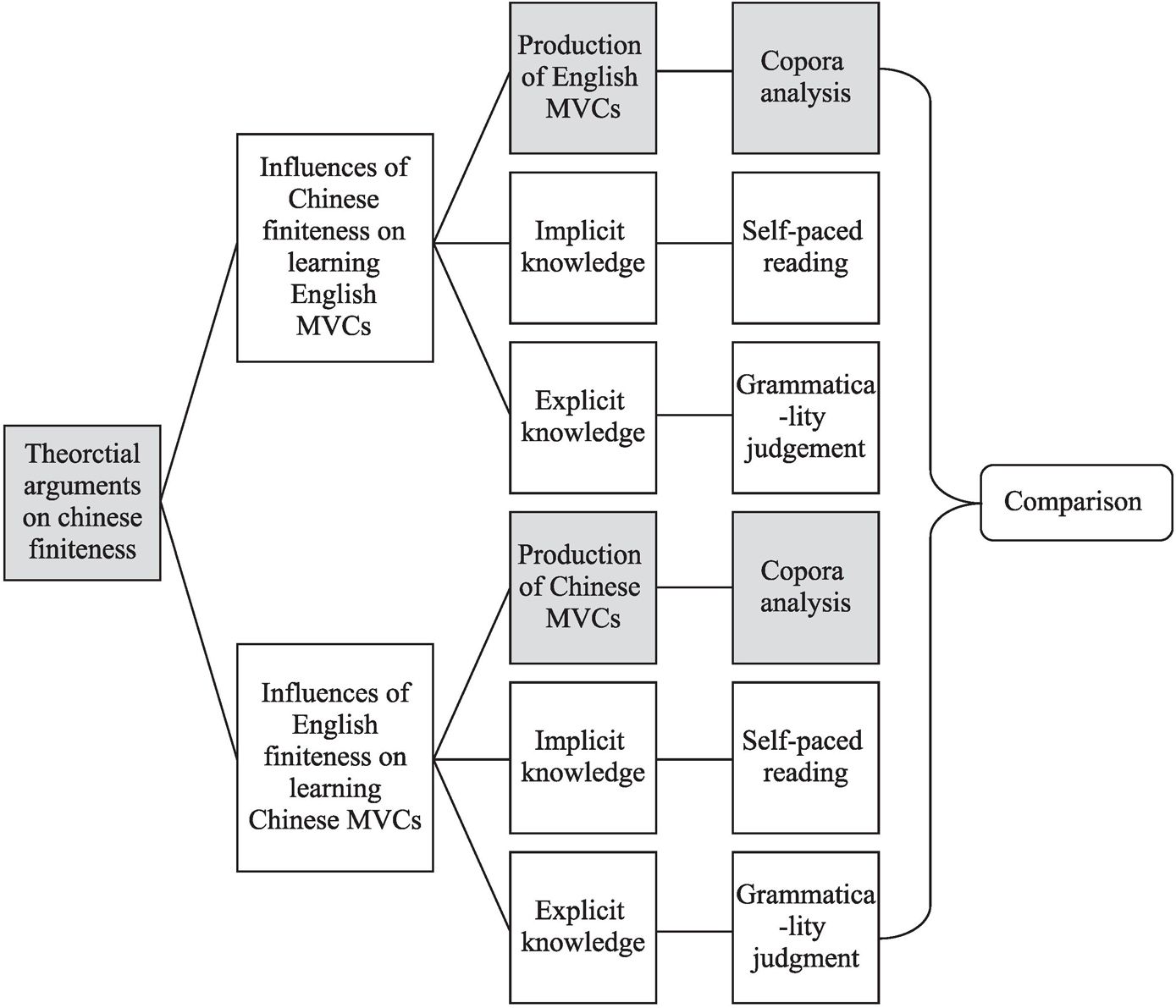 This research attempts to answer one question：whether and how cross-linguistic differences between typologically distant languages，i.e.，morphological-finiteness vs. semantic-finiteness，influence L2 grammatical acquisition and processing. This question is further divided into six sub-questions，which are respectively addressed from the direction of English as L2 learning and Chinese as L2 learning.

With regard to English as L2 learning，I will conduct a thorough，comprehensive study of the cross-linguistic influence on Chinese ESL learners’ production，explicit and implicit knowledge of English MVCs and of the role of L2 proficiency.

As for Chinese as L2 learning，the following questions are addressed：

In sum，with regard to Chinese-learning，the influence of English finiteness on L2 learners’ production and implicit and explicit knowledge will also be thoroughly investigated. The bidirectional study will finally present a qualitative comparison.

The current research investigates how the typological differences in finiteness influence L2 study. The property of finiteness is very important in morpho-syntactic construction. Nikolaeva（2007）stressed that finiteness is a central element in theorizing about morpho-syntax，as it is related to tense marking，subject-verb agreement and the requirement that clauses have a subject. Gisborne（2009）argued that some of the typological contrast at the morpho-syntax level，such as the topic prominent and null subject in Chinese vs. the subject prominent and non-null subject in English contrast，and tenselessness in Chinese vs. tense in English contrast，may be due to the fact that Chinese lacks a super-category or a more abstract category of finiteness：in a language where there is no finiteness，there is no need to have a copular verb，tense or even a subject to carry morpho-syntactic information to express the finite and non-finite distinctions. Thus，the finiteness might be a super-abstract property that relates to other apparent typological differences between English and Chinese. It is therefore important to investigate how the typological differences of this super-abstract property influence L2 acquisition，which may reveal a deeper picture of L2 learners’ sentence construction since，as Klein（2006）notes，“the acquisition of finiteness leads to a major restructuring of learner language”（p. 5）. 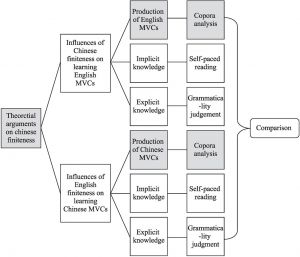