The typological differences of finite and nonfinite distinctions may not only influence Chinese learners’ written production and L2 processing of English MVCs，but also have an effect on English learners’ acquisition and processing of Chinese MVCs. How learners from the L1 with morphological [+-F] distinction acquire and process the semantic finiteness and compound predicates in the L2，remains unclear.

This chapter focuses on English CSL learners’ acquisition and processing of Chinese MVCs. It is a parallel study to that described in Chapter Five，using similar integrated research methods including learners’ interlanguage corpus，offline grammatical judgment test and online self-paced reading tasks for the purpose of a bi-directional comparison. The research in this chapter aims to investigate how cross-linguistic differences influence L2 learners’ different types of knowledge including production，explicit knowledge and implicit knowledge of the lexical cues in Chinese MVCs. Before that，Table 28 is displayed to remind us of the cross-linguistic differences in the Chinese and English MVCs.

There are two types of cross-linguistic differences between Chinese and English MVCs，which are respectively type I：both have finite and non-finite distinctions but the cue to distinguish them have differences；and type II：English has a finite and non-finite distinction while in Chinese pivotal and serial-events sentences aspectual morphemes can be after V2 and thus both verbs are interpreted as finite. 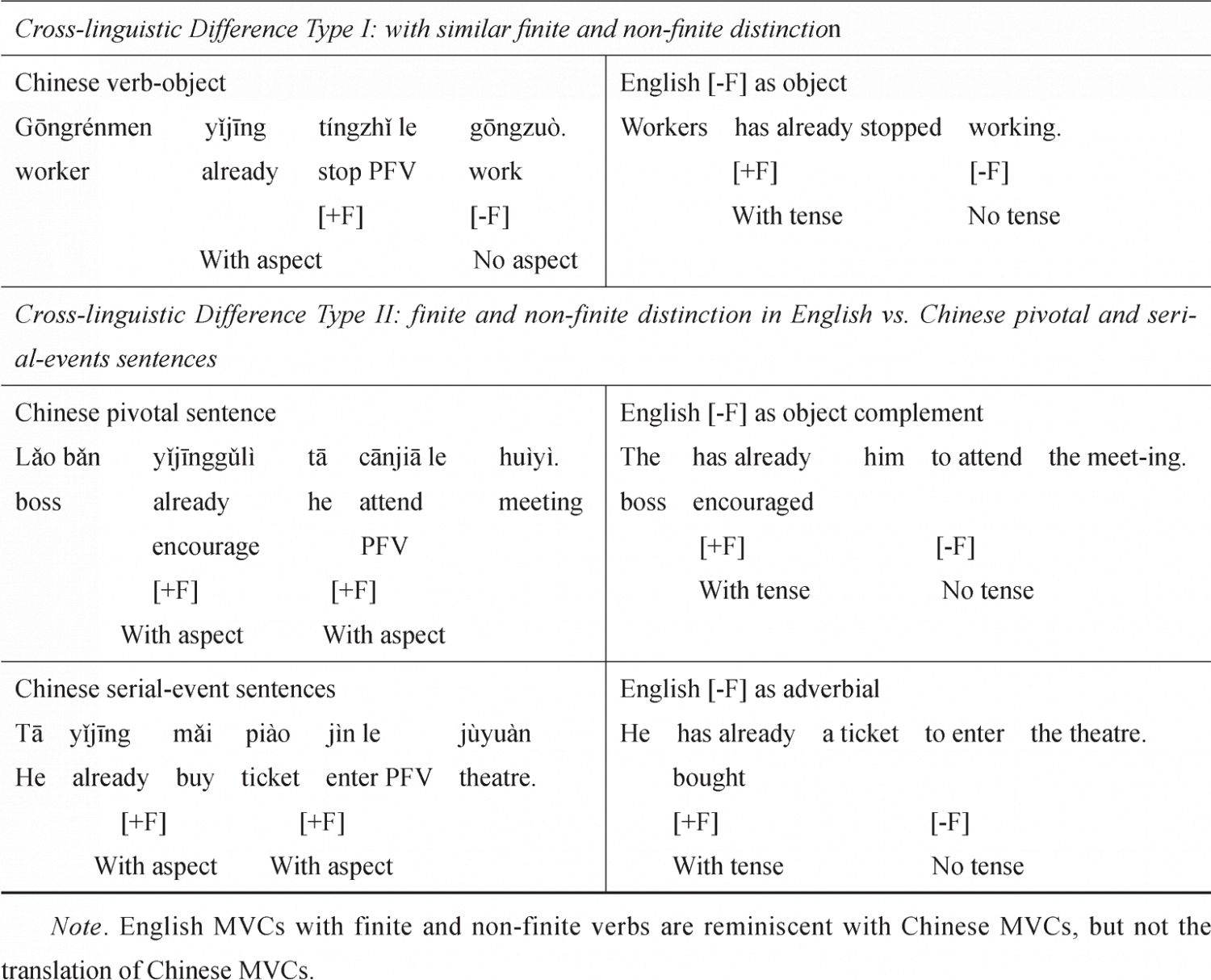 The form-meaning mapping in Chinese is opaque and optional，as the aspectual markers are not compulsory in MVCs，and morphemes such as “le” can function to indicate the perfective aspect or the completion of the whole sentence. Additionally，the compound predicates in Chinese MVCs have no counterparts in learners’ L1. Thus，this may pose a learnability problem for English CSL learners.

With the rapid development of “teaching Chinese as foreign language” since the mid-1990s，there has been some research based on Chinese interlanguage corpus in the study of the acquisition of Chinese grammatical features. These include research on negators，the bi comparative structure，degree adverbs，gei sentences，double object structures，and figures of speech（Hua，2009；Shen，2009；M. Wang，2005；D. Yang，2004；Y. Yuan，2005；Zheng，2006；Zhou & Hong，2010）. There have also been error analysis studies on Chinese pivotal and serial-event sentences by learners of different language backgrounds（Sun，2008；Zhou，2009）. However，no research to date has explored the acquisition of MVCs by English L2 learners from the perspective of cross-linguistic influences.

With the inductive approach，the following three research questions were addressed：

The HSK dynamic composition corpus contains metadata about students’ background such as age，country，and language skill level. In the corpus，46 error types were labeled. The errors range from character level，word level，sentence level，to discourse level. {}is the wrong sentence tagger used to identify sentence misuses. Sentences were tagged with this tagger after the sentence，before the sentence punctuation，and pinyin were added to briefly indicate the type of misuse.

The current research chose all Chinese L2 learners from the UK who took HSK from 1996 to 2005 as participants，and probed into the misuses in using the four kinds of sentences，i.e.，verb-subject，verb-object，pivotal and serial-event sentences. There were 108 participants，and one of them was not recorded with a score，so there were 107 valid written compositions. Table 29 displays the brief information of English CSL learners.

Sentences with verbs as subject，object，pivotal sentences and serial events sentences were all extracted from 107 raw compositions written by English CSL learners from the UK. The misuse types were divided to mis-positioned aspectual morphemes（wrong-place “le”），lexical collocations and mixed sentences（two or more sentences combing together）. Table 30 shows the coding method used in the current research. Examples of misuses are listed in（26）-（29）.

The examples of learners’ misuses are as follows：

I now rely ASP（le）on my own ability become a primary school teacher.

Parents should give them a good example.

The grammatically correct sentence is “zhège gùshì zhēn shǐwǒ rěnjùnbùjīn”（this story really make me laugh）. Verb phrases with topic time “gāng kàn wán”（just read finish）cannot function as the subject，so the sentence “I just finish reading this story” and “this story makes me laugh” were mixed together by the learners.

Before the data analysis，normalization was performed by dividing the total number of words by the number of participants in each group and the results multiplied by the misuse counts（See Table 31）. 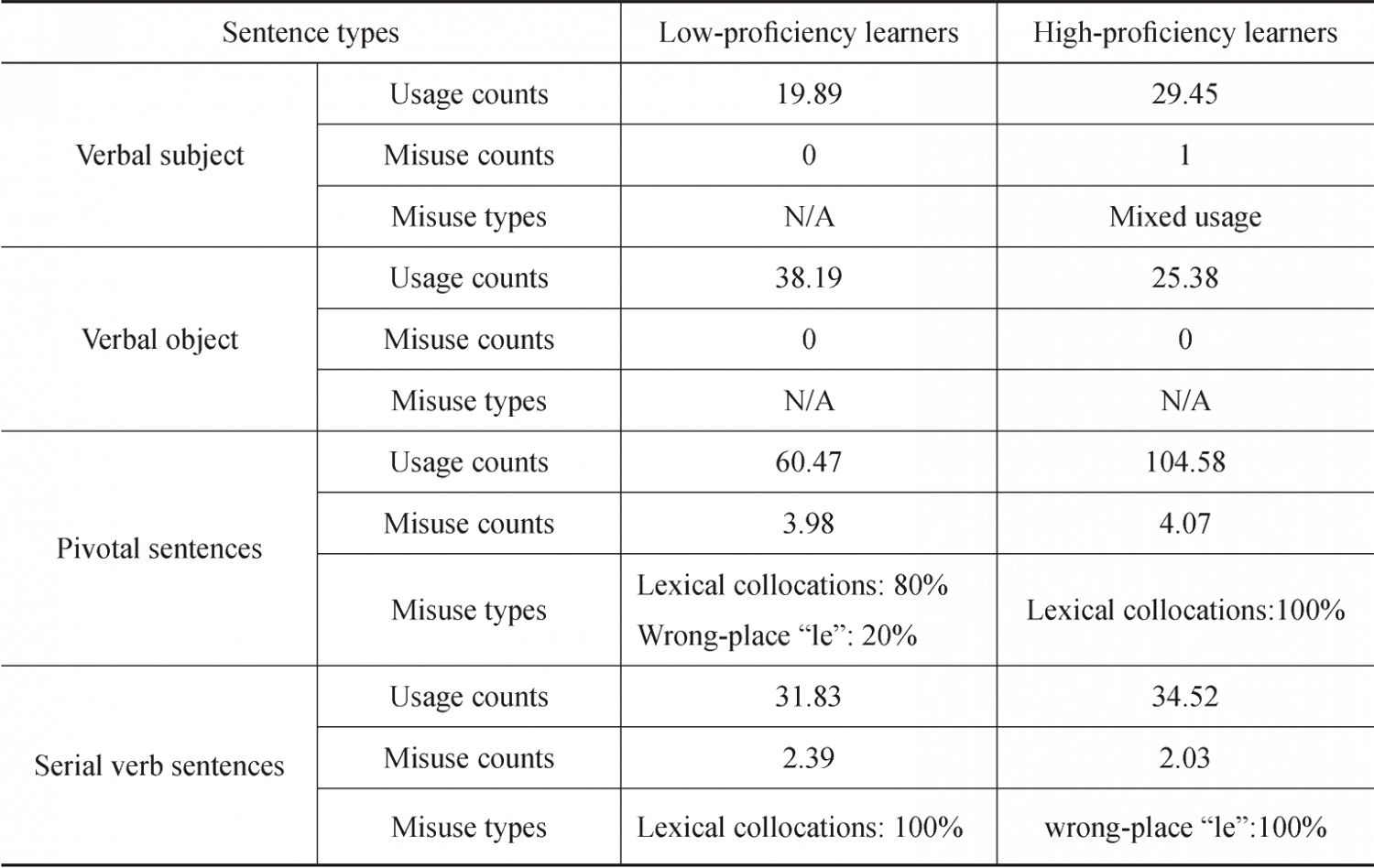 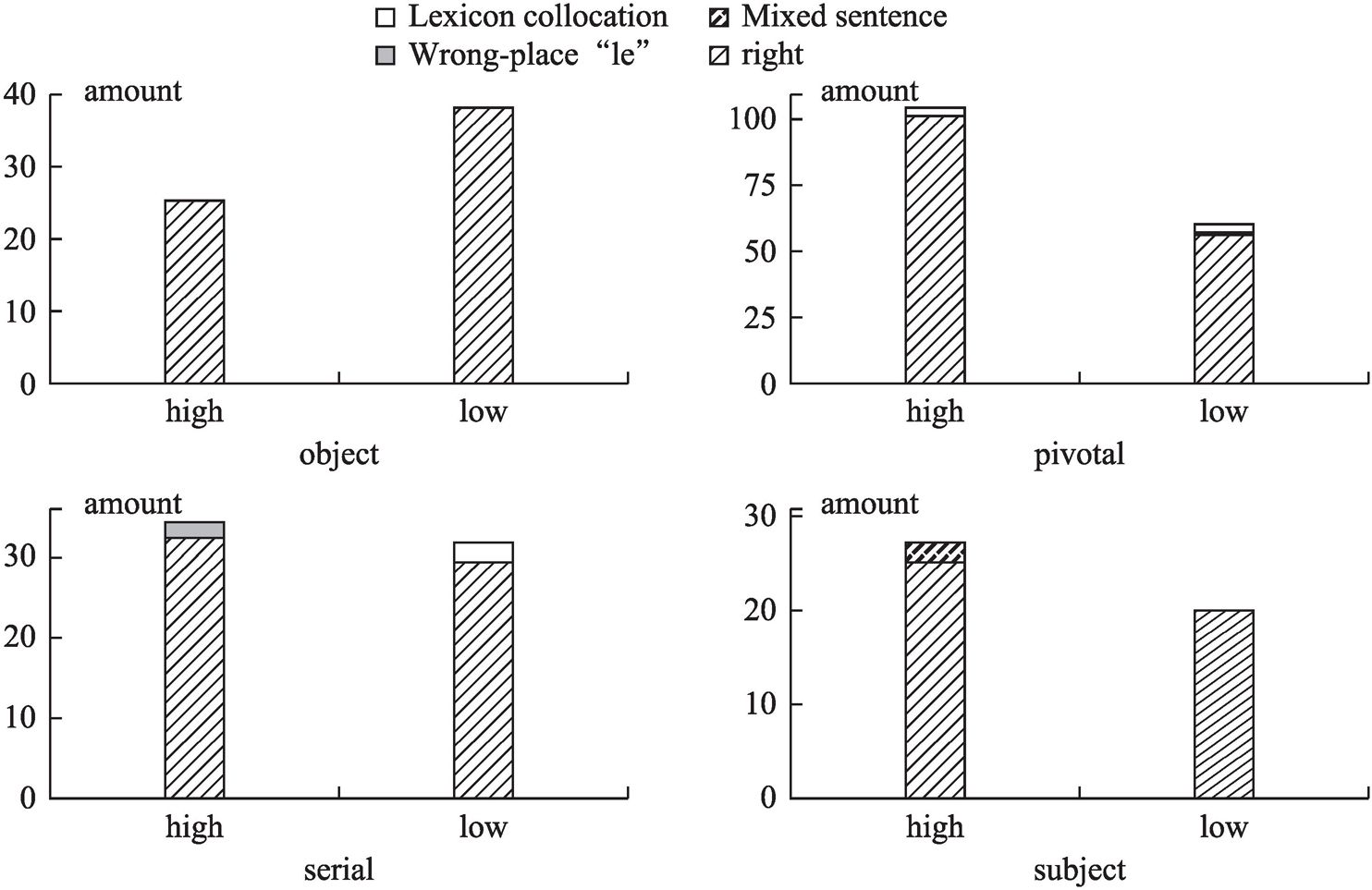 The mis-positioned aspectual morphemes found in pivotal and serial-event sentences among English CSL learners are argued to be attributed to the cross-linguistic influence from the L1 morpho-syntax. The typological differences between English [-F] as object complement or adverbial sentences and Chinese pivotal or serial-event sentences are in the finite and nonfinite distinction. In pivotal or serial-event sentences，aspectual morphemes（e.g.，perfective marker “le”）can be put after V2 to indicate the completeness of the event continuum，and thus both verbs are finite. This is different from the clear finite and non-finite distinction in English，even though the word order，positions of verbs in these sentences are reminiscent between English and Chinese. English CSL learners may have regarded “le”（perfective aspectual particle）as the marker of past tense（-ed），and added “le” after the matrix verb to express the past time（see examples in（26）（27）and misuse counts in Table 31）. Therefore，morpho-syntactic transfer occurred. This interpretation is also confirmed by the fact that no mis-positioned aspectual markers were observed in verb-subject or verb-object sentences，as in these sentences the position of “le” is consistent with the position of “-ed” in the English counterpart. The corpus-based analysis indicates that the morphological finiteness in English did have some influence on the production of Chinese MVCs in L2，and the influence was reflected as morpho-syntactic transfer.

The current research provides new evidence on how English morpho-syntactic features influence the acquisition of Chinese structures. This is consistent with Jin（2009）’s findings that English CSL learners are inclined to regard morpheme “le” as a tense marker and equate it to the English “-ed”. The present findings imply that English learners not only equated the tense marker to the aspectual marker to express the temporal information，but also transferred the more abstract property “finiteness”，which is marked by the tense marker in their L1，to Chinese.

L2 proficiency was not found to make a difference in the number of misuses，however，it played an important role in the frequency of using MVCs. That is，the higher the L2 proficiency，the more usage of pivotal and serial-events sentences. This can be interpreted as the natural developmental sequence in the L2 acquisition，that is，learners developed L2 competence gradually，from using simple sentences to complex sentences，and with the development of the L2 proficiency，learners would be more and more confident in using the relatively complex sentences. It may also be argued to be the intentional avoidance as a communication strategy. “It is obvious that communication strategy is the conscious employment of verbal mechanisms for communicating an idea when linguistic forms are not available to the learner for some reasons”（Heydari & Bagheri，2012，p. 1584）. L2-Chinese learners were found to underuse pivotal sentences and serial-event sentences in comparison with Chinese natives in previous corpus-based studies（Sun，2008；Zhou，2009），and the present study showed that English CSL learners of low-proficiency had even fewer usages of these sentences.

Other misused forms include the mixed sentences and improper lexicon allocation（see example（28）（29））. These were possibly attributed to the intralingual or developmental misuses，suggesting learners’ unfamiliarity to the sentence patterns and lexicon allocation due to inadequate learning.

In sum，these results answered the research questions about what non-target like usages English CSL learners may have，and if they are a reflection of the cross-linguistic influence. The corpus analysis showed three types of misuses：mis-positioned aspectual morphemes，lexicon collocations and mixed sentences. Mis-positioned aspectual morphemes were argued to be the reflection of cross-linguistic influence from L1 reminiscent sentences. Furthermore，the sentence types in Chinese MVCs did make a difference；that is，mis-positioned aspectual morphemes were not noticed in sentences with verb-subject or verb-object. Misuses appeared randomly among CSL learners of different proficiencies，and no certain tendency was found with the increase of proficiency. However，L2 proficiency was found to play a role in the frequency of using MVCs，that is，except for the verb-object sentences，low proficiency learners tended to use fewer MVCs.

Existing Chinese learner corpora also suffer from a lack of balance in terms of learners’ first language backgrounds and the nature of the data included in the corpora. They are seriously biased towards Asian learners such as Korean，Japanese，and Southeast Asian learners，while learners from Europe and the Americas are seriously under-represented. The range of genres in the learner material is limited-such corpora are almost exclusively composed of compositions completed by foreign learners under test conditions. They also suffer from inaccurate and inconsistent annotation and limited public availability（p. 449）.

Second，as a common disadvantage in all corpora studies，the recorded learners’ nationality cannot fully expose learners’ learning background. This is very different from Chinese ESL learners’ interlanguage corpora，because English is the compulsory course in China and students have similar classroom instruction background with the same syllabus and textbooks. By comparison，English CSL learners who attended HSK may acquire Chinese by natural exposure，self-study，or classroom instruction，which to some degree blurs the source of influence.

Even though a handful of misuses were found in the corpus analysis，with the factors of a small-size sample pool，naturalistic productions and possibly varied learning methods，it is immature to argue that English learners had no difficulty in acquiring Chinese MVCs. The corpus analysis in the current study exposed the morpho-syntactic transfer from English [+-F] distinction to Chinese pivotal and serial-event sentences，which implies that learners may be not aware of the function of the lexical cues in interpreting Chinese MVCs.

To sum up，this section specified the corpus analysis of English CSL learners’ production of Chinese MVCs. The results indicated the cross-linguistic influence in the form of the mis-positioned aspectual markers in English CSL learners’ production of pivotal and serial-event sentences. It suggests that English CSL learners may have used the tense cues in their L1 to interpret and compose Chinese structures with multiple verbs. It thus raises the question about whether English learners have the knowledge of the lexical cue to distinguish the finite and non-finite verbs in Chinese MVCs. Therefore，grammaticality judgment tests were designed and will be introduced in the next section.

In comparison with the explicit，consistent English morphological distinction of finite and non-finite verbs in all types of MVCs，multiple verbs in Chinese mono-clause present the character of implicity in cue and opacity in interpretation. Interrelations among multiple verbs can be diagnosed in the way of “broad morphology”（Fang，1939）. It means that even though there are no morphological inflections in Chinese，it is a characteristic that some Chinese words can combine with each other，but others cannot，and this plays an important role in Chinese syntax. In Chinese MVCs，where the aspectual adverb “yǐjīng”（already）can be combined shows the dynamic state of the verb [e.g.，“chōuyān yǐjīng wéihài tā de jiànkāng”，（smoke already harm his health）]（Li & Thompson，1981；Xing，2004）. This cue is in lexical rather than morphological level. To check if English learners have the metalinguistic knowledge of the lexical cue among multiple verbs，a grammaticality judgment test was designed.

The question：if English CSL learners have the explicit knowledge of the diagnostic lexical cue in distinguishing [+-F] in Chinese MVCs and if the L2 proficiency affects this. 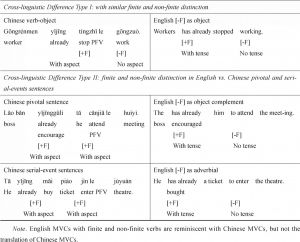 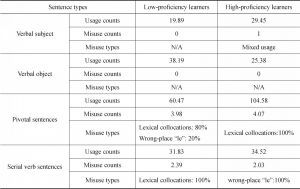