This chapter presents a discussion of the results of the empirical studies in Chapter Five and Six from a bidirectional perspective and gives a qualitative comparison between the two sets of studies. The results will be discussed from two aspects：the bidirectional comparison of Chinese-English and English-Chinese learners’ acquisition and processing of MVCs in the L2；and the theoretical implications including contributions to semantic finiteness and cross-linguistic influence theories.

7.1 A Bidirectional Comparison of Chinese ESL Learners and English CSL Learners’ Acquisition and Processing of MVCs in the L2

In order to make the participants from the two sets of study comparable，the current research controlled potential influential variables as far as possible，such as，enrolling participants of similar ages in the experiments（range：18-22），from universities（indicating a comparable education background and classroom instruction），employing L2 proficiency tests with the commonly used test materials.

Chinese ESL learners and English CSL learners’ written production were examined respectively via Chinese Learners’ English Corpus（Gui & Yang，2003）and HSK Dynamic Composition Corpus（X. Cui，2006）. Different types of misuses in MVCs were observed from the L2 learners’ interlanguage analysis. English and Chinese MVCs differ not only on the morphological level（morphological [+-F] distinction in English vs. semantic [+-F] distinction in Chinese）but also on the morpho-syntactic level（morphological [+-F] distinction in English vs. finite and finite verbs in Chinese pivotal and serial-events sentences with aspectual markers），so the comparison will be given from these two aspects. L2 proficiency was found to play an important role in the production of MVCs，thus a separate sub-section will specify the role of L2 proficiency in producing MVCs in the target language.

To recall the English and Chinese MVCs，the former is composed of morphologically different finite and non-finite verbs；in contrast，even though multiple verbs in Chinese usually take bare forms without any morphological changes，there exists semantic finite and non-finite distinction（Klein，1998，2006，2009）. There is a diagnostic method of using the aspectual adverb “yǐjīng”（already）or the aspectual morpheme “le” to distinguish the semantic finite verb from non-finite verbs. The placement of the perfective adverb “yǐjīng” and the morpheme “le” in Chinese verb-subject/-object sentences is consistent with the position of “already” and past tense marker “-ed” in English sentences with [-F] as subject/object. For instance，the Chinese sentence dúshū gǎibiànle tā de mìngyùn，“read change-le his fate” can be translated to “reading has changed his life”，where “reading” is the non-finite verb. Therefore，the difference between this type of Chinese and English MVCs，in which English non-finite verbs take the form of “V.-ing” or “to infinitive” while Chinese ones take the bare verbs，is about the morphology.

The forms in English appear to be redundant in expressing non-finiteness in comparison with bare ones in Chinese. The theory about form mapping has predicted the difficulty of acquiring redundant forms when semantic difficulty being the same（DeKeyser，2005）. Previous researchers have noticed the difficulties of acquiring rich morphology by a native speaker of a language with poor or no morphology. For instance，in Lardiere（1998）’s longitudinal study，the Chinese ESL learner was found to produce a very low rate of inflectional verbs even if the participant has acquired related features，such as word order，subject case assignments and has lived in the English-speaking country for many years. It is also deducted that from the morphological-rich L1 to the morphological-poor L2，it would be easy，because with the similar meaning L2 learners would transfer their L1 forms to nowhere（DeKeyser，2005）.

The current research found that Chinese ESL learners produced a large amount of bare verbs in subject，and bare verbs and to do variants in object where non-finite verbs should be used. Furthermore，there was a decline in the misuses with greater L2 proficiency. In the corpus analysis of English CSL learners’ interlanguage，no misuses were found with verbal objects and only one misuse was about using a clause as the subject.

As stated in Chapter Five，the bare verbs are possibly a reflection of the cross-linguistic influence from the Chinese non-finite forms，even though the developmental problem in L2 acquisition such as simplification may also have some effects in this misusage. Moreover，it is argued that the to-do variants originate from the unfamiliarity of the inflections of L2. In contrast，no cross-linguistic influence was found in the opposite direction which has been reported in Chapter Six. It thus suggests that from the L1 with semantic finiteness to the L2 with morphological finiteness，morphology was a difficulty in producing MVCs and morphological transfer occurred，diminishing with greater L2 proficiency. From the L1 with morphological finiteness to the L2 with semantic finiteness，this appeared not to be a difficulty.

The forms of misuses shed some lights on how the cross-linguistic differences of the finite and non-finite distinction between English and Chinese influence L2 production. The results of the current study confirmed learnability problems regarding form mapping. That is，the difficulty of learning forms in the L2 is “the number of choices involved in picking all the right morphemes and allomorphs to express these meanings and putting them in the right place”（DeKeyser，2005，p. 6）. With the similar semantic difficulty，the redundant forms appear to pose more difficulties in L2 learning.

Another type of Chinese MVCs is those with compound predicates which feature in having the same grammatical categories，such as aspect，modality，negativity or positivity，and tense（Tao，2009）. In this type，the aspectual adverb is before the compound predicate（V1+V2），and to indicate the completeness of the event continuum，the aspectual morpheme is after the compound predicate（V1+V2）in Chinese pivotal and serial-event sentences. English sentences with [-F] as object complement and adverbial always have the temporal adverb “already” before the predicate（V1）and the past tense inflection “-ed” after the predicate（V1），so the cross-linguistic influence is on the syntactic level rather than the morphological level. For instance，Chinese sentence māmā jiào wǒ huíle jiā，“mom call me go-LE home” has the meaning of both “mom called me to go home” and “I went home”.

Based on the form-meaning mapping theory（DeKeyser，2005），it was predicted that mapping the V1-V2 relation with correct forms is difficult for learners of both directions，i.e. Chinese-L1-English-L2 and English-L1-Chinese-L2. Because the aspectual marker “le” is more suffixed with V2 indicating the complement of the event continuum，while the tense marker “-ed” is always with V1 which is the only finite verb as the predicate. The meanings of these morphemes are different，and so are the interrelations of the V1 and V2. As shown in previous studies，L1-L2 contrast in syntactic structures may lead to morpho-syntactic transfer（e.g.，Chan，2004；Green，1996；Helms-Park，2003；Hertel，2003；Sabourin，2001；Matthews & Yip，2003；Xiao，2002；Yang，2008；Yip，1995；Yip & Matthews，1995）or avoidance in the production（e.g.，Xiao，2002；Jung，2004）.

These results showed that Chinese ESL learners tended to regard “le” as “-ed” and transferred pivotal and serial-events sentences in their L1 to English sentences with [-F] as object complement and adverbial. In the opposite direction，English CSL learners transferred the finite and non-finite verb distinction to Chinese pivotal and serial-events sentences and appeared to regard “-ed” in finite verbs as the Chinese aspectual morpheme “le”. This is consistent with L. Jin（2009）’s findings that English CSL learners，especially low-proficiency learners，have a strong inclination of regarding morpheme “le” as a past tense marker and equating it to the English “-ed”. The current research provides evidence that both English CSL learners and Chinese ESL learners transfer the function of these markers from their L1 to the interpretation of multiple verbs in the L2.

The comparison suggests bidirectional cross-linguistic influence in L2 learners’ production and confirms previous findings relating to typological differences between Chinese and English（e.g.，Jin，1994；Jung，2004；Xiao，2002；L. Yang，2008；Yip，1995）. For instance，Chinese learners were found to produce sentences with topic-prominent features in English，such as the double nominative constructions（e.g.，Britain，have you ever been？）（Xiao，2002；L. Yang，2008；Yip，1995）. While learners from a subject-prominent background（English）usually avoid L2 topic-prominent sentences. In Jung（2004）’s study，twenty-three native English speakers who were learning Korean（topic-prominent language）were required to describe a film in compositions. The compositions showed clear evidence of cross-linguistic influence that lower-proficiency English learners tended to preserve the subject and object in Chinese sentences. The use of topic-prominent sentences such as zero anaphors，topic markers（n）un，and double-nominative constructions gradually increased with the L2 learners’ proficiency.

Previous research together with the results of the current study all indicate that the L1 and L2 contrast has an influence on the second language acquisition，no matter from Chinese L1 to English L2 or from English L1 to Chinese L2. Cross-linguistic influence can be shown either as the morpho-syntactic transfer from the L1 structures or as avoiding using L2-specific sentences. The findings from the comparison provide support to the transfer theories stating that transfer occurs when the L1 and L2 have syntactic differences（Odlin，1989）and evidence the form-meaning mapping theories（DeKeyser，2005）.

Many previous studies have demonstrated the effects of L2 proficiency in cross-linguistic influence. That is，morpho-syntactic transfer decreases with the improvement of L2 proficiency and L1-resembling structures mainly occur among low-proficiency learners（e.g.，Chan，2004；Jung，2004；Helms-Park，2001，2003；Hertel，2003）. There were also studies showing that acquiring certain functional morphology which is absent in learners’ L1 is especially difficult. For instance，tense markers and plurals were observed to be omitted among Chinese ESL learners even with a high L2 proficiency（e.g.，Chang，2005；Jiang，2004；Slabakova，2009）. 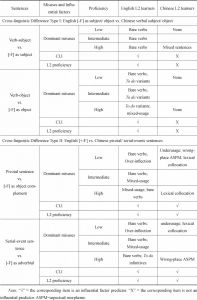 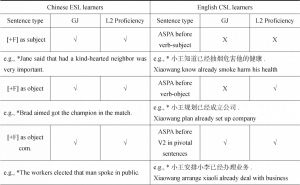 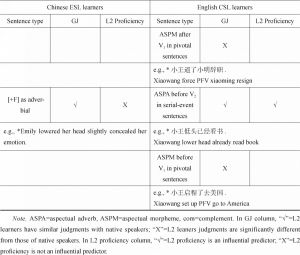 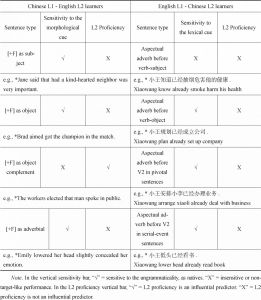